Physiotherapy in Burlington for Fibromyalgia 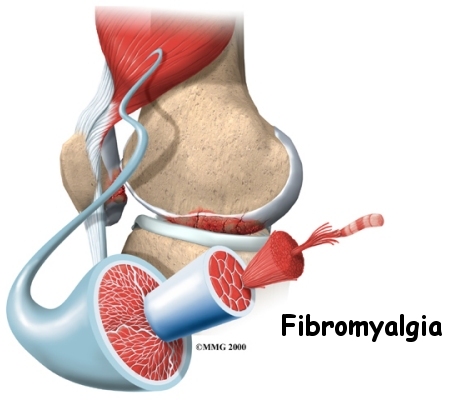 Welcome to Fit For Life Physiotherapy's patient resource about Fibromyalgia.  The following is an educational overview of Fibromyalgia and common treatment options.

Fibromyalgia, though common, is a disease that's not well understood. It involves pain throughout the body, with especially tender spots near certain joints. The pain stops people with fibromyalgia from functioning normally, partly because they feel exhausted most of the time. Fibromyalgia is a chronic (meaning long-lasting) condition that usually requires many years of treatment. It can occur along with other forms of arthritis or all by itself. It can occur after an injury or out of the blue. Most people diagnosed with fibromyalgia are women in their middle years.

This guide will help you understand:

Where does fibromyalgia develop?

Pain in fibromyalgia is present in soft tissues throughout the body. Pain and stiffness concentrate in spots such as the neck and lower back. The tender spots don't seem to be inflamed. Most tests show nothing out of the ordinary in the anatomy of people with fibromyalgia.

Why does fibromyalgia develop?

The causes of fibromyalgia are unknown, but one thing is for sure: you're not making it up. Many sufferers have been told that it's all in your head by family members or other doctors. It is true that people with fibromyalgia are often depressed, and that stress worsens symptoms. But depression and stress don't seem to be the driving forces behind the disease.

Fibromyalgia often occurs along with other conditions, such as other forms of arthritis, Lyme disease, or thyroid problems. It can also develop after a serious injury. These problems may cause the fibromyalgia to develop.

About 80 percent of all fibromyalgia patients report serious problems sleeping. Because fibromyalgia is so strongly connected to sleep disturbance, in some cases it is possible that the sleep disturbance is the major cause. In fact, studies have produced fibromyalgia-like symptoms in healthy adults by disrupting their sleep patterns.

There is some evidence that fibromyalgia is linked with autoimmune disorders, in which your immune system attacks the tissues of your own body. Sufferers have lower pain thresholds and lower levels of serotonin, a brain chemical involved in pain, sleep, and mood. However, it's unclear whether these conditions cause the fibromyalgia or are a result of the disease.

The symptoms of fibromyalgia are long lasting and intense. However, they can vary from day to day. Symptoms include:

Blood tests and X-rays don't show fibromyalgia in your body. However, your health care provider may do these tests to rule out other conditions. There are really only two tools used to diagnose fibromyalgia. One is your history of symptoms. The other involves putting pressure on eighteen tender point sites. If you feel pain in eleven of these eighteen sites, you are considered to have fibromyalgia. (However, it is still possible that you can have the disease with pain in fewer sites.) 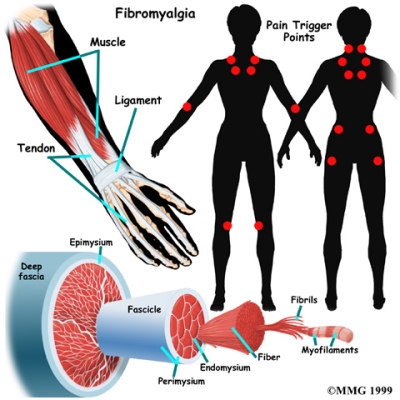 In some patients, doctors may recommend X-rays to look at the bones near painful spots. The X-rays will not show fibromyalgia but are used to make sure there are no other causes of your pain. Other special tests such as electromyograms, which measure the contraction of muscles, may be used to try to determine if the muscles show abnormalities. Most of the time these tests are negative. A sleep history, and possibly a sleep study, could be important to the diagnosis.

Chronic fatigue syndrome (CFS) may need to be ruled out. CFS is another disease that is difficult to diagnose and has puzzled doctors for many years. CFS and fibromyalgia share many symptoms, especially the severe exhaustion. The major difference is that CFS causes flu-like symptoms, such as low-grade fevers, sore throats, and swollen lymph nodes.

What can be done for the condition?

When you visit Fit For Life Physiotherapy, the first step in the treatment of your fibromyalgia is to help you understand this complex and frustrating disease. Many patients are relieved to learn that the disease is not all in their head, and that our physiotherapists can develop a program to help manage pain and exhaustion.

It is uncertain whether fibromyalgia is ever cured. Like many chronic diseases, the symptoms of the disease can be controlled. The successful treatment of fibromyalgia is very much a joint effort between doctor, physiotherapist and patient.

Any treatment program will likely last for many years but patients do get better. At Fit For Life Physiotherapy, our goal is to help you keep your pain under control so that you can enjoy your normal activities and lifestyle. Recent studies show that about 25 percent of patients treated for fibromyalgia were in remission at the end of two years. Many others have reduced their pain to tolerable levels.